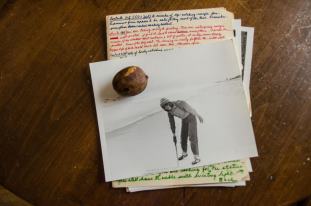 This photograph was sent to me by Christine Anderson after I posted about the Perhaps I’m Just a Poser project on Flak Photo Network. A few of us had a great conversation that made me laugh, and Christine had some funny tales. Anyway, as an example of the sort of conversation:

CA: “..this is also the now 40 year old lemon which was given to me when it was 20 years old by a sculpture student….. Cant find the cow picture as of yet but I wanted to get you something.”

PW: “Hey Christine, a 40 year old lemon?! That’s older than me! I’m going to put this photograph on my blog if that’s ok? It’s great. Was the photo of you taken during an educational situation? ”

I love it when objects have a story to tell, but also when something makes me laugh. Of the educational situation the photograph was taken under, Christine said:

“This picture was my first year at school my freind had to take some pictures for photography class….so we went to the beach…. My college was situated on the bay in long island and was two minutes from beach… At the time I was Extremly shy…. The folder is my photography folder where my teacher wrote my critiques on the folder…. I was a painting major.”

Leave a Reply to Stephanie Dean